Avigrain birdseed mixes provide the seed component of a balanced avian diet. In the wild birds eat a wide variety of fruits, vegetables, flowers, plants, nectar, grains, roots & tubers, nuts, grubs, animal matter such as insects and carrion , grit and even clay. A pure seed diet will be relatively high in fat and low in nutrients particularly Vitamin A and calcium. Seed is a vital part of a balanced avian diet but should not be the only part.

Although ‘complete’ diets such as pellets or fortified seed diets claim to provide a balanced diet they give breeders a false sense of reassurance and do not replicate natural conditions or nutritional inputs. Also, while little is known about how the mind of a bird works, bird-fanciers will agree they are intelligent creatures and a monotonous pellet diet will bore them. A varied diet provides mental stimulation for caged and aviary birds. 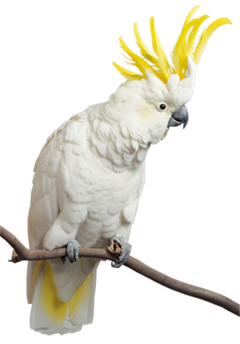 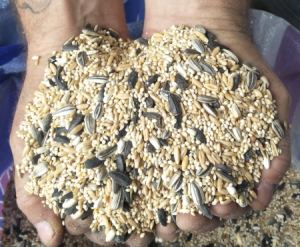 Oilseeds are much higher in fat and lower in carbohydrate than cereal grains. It is also worth noting that millets are nutritionally similar to each other and different to canaryseed. Canaryseed is an important ingredient as it is low in carbohydrates and higher in fiber than the other grains present in the mix.

Protein is known as the “building blocks” of muscle tissue. It is protein that provides essential nutrients for muscle building and growth. However, excess protein and little exercise will do little to enhance muscle development. Any excess protein is often stored as fat, and without exercise protein storage will add to the quantity of fat in the body.

Fat is any excess material that the body doesn’t need – unless there is an excess of activity by the body. Generally fat acts as blubber would on mammals, and may be useful for warmth of the body in colder climates.

Fibre is essential to ensure ‘cleansing’ of the digestive system. It has also been said that fiber ensures regularity of bowel movements and acts to assist the body utilising required vitamins and nutrients.

Carbohydrate is fuel for the body. Carbohydrates found in any foods finally breakdown into glucose, and are an essential part of any diet. Carbohydrate means that carbon dioxide and water act to release energy , therefore foods with higher carbohydrate yield greater energy. Once again excess Carbohydrates end up as fat but excess carbohydrate may be less harmful than excess protein. top 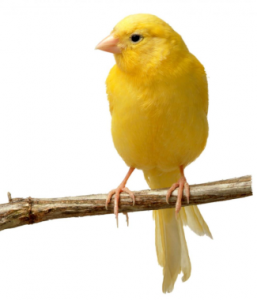 Annual Canarygrass or canaryseed is a crop with a life cycle similar to that of wheat or oats. Phalaris canariensis is native to the Mediterranean regions, and is grown on large acreages in the Middle East, Europe, and Argentina. Canada produces around 90% of the world supply of canary seed, about 90% of which comes from the province of Saskatchewan.

Canaryseed is a winter crop and is grown anywhere wheat can be grown. We have sourced it anywhere from the Wimmera in Victoria to Central Queensland, however the main area of supply is the Darling Downs of Southern Queensland. Canary grass has small elliptical grains with hulls, which are covered with very fine silicious spicules that can be skin irritants and cause problems during harvest and transportation.

Canaryseed is considered an important component of quality birdseed mixes. It is very palatable and provides a different set of nutritional inputs to millets. From the nutrition table it can be seen that canaryseed is much lower in carbohydrate and higher in fibre than millets. It is therefore important in mixes as a food source which is not fattening. Canary, finch and budgerigar breeders place great importance on canaryseed being in their birds diet. It makes up the bulk of a good canary mix and top budgie breeders insist on at least 50% canaryseed in their mix. At Avigrain we take great pride in the fact that there is always canaryseed in our mixes and we have not changed the mix ratio over the years. Generally canaryseed is far more expensive than millet and we believe the sign of a poor-quality breeders mix is a lack of canaryseed.

The Canadian crop determines world canaryseed pricing. 10-30% of Canadian production is used domestically and the remainder, annually about 125,000 tonnes is exported largely to Europe, South America, and the US. Australia has had to import canaryseed from Canada in times of drought.

University research in Canada has shown that canaryseed is the most ‘speculated’ agricultural commodity in the world. Because the Canadian crop is so important to world production, if it fails the world price rises dramatically. Also it is possible to store canaryseed for years without it deteriorating, unlike other birdseeds or cereal grain. This means that farmers all over the world will hold canaryseed for years waiting for the price to rise during a bad year in Canada. Canaryseed in Australia is often grown as a speculative opportunity crop and the price can fluctuate dramatically. Avigrain aims to have a significant percentage of our annual use grown under contract to try and minimise the impact of price fluctuations. 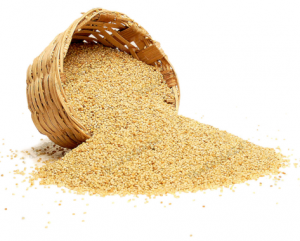 Millets are annual grasses and are some of the oldest of cultivated crops. The term millet is applied to various grass crops whose seeds are harvested for food or for animal feed. In China, records of culture for foxtail and proso millet extend back to 2000 BC. Millets are rich in carbohydrate and low in fibre. Nutritionally they are very similar to each other and as such are substitutable in birdseed mixes.

Millets are grown in Australia for domestic use and export. The bulk of the millet crop in Australia is grown on the Darling Downs in South-East Queensland. Millets are a short, fast-growing summer crop which may be planted either in September/October (early) and harvested in January or planted in Janurary/Feburary (late) for a March/April harvest. White French and Panorama are the main varieties grown for birdseed.

The market price for millet depends upon the size of the crop. In good growing years the annual millet harvest is well in excess of domestic consumption and the price will be set by what the export market is prepared to pay. The export price will be influenced by factors such as world supply and the level of the Australian dollar. Australian millets command a price premium for quality but find it difficult to compete on price with Chinese foxtail millet and Proso (white french) millet from the US. When there has been a poor harvest here and there is a chance domestic demand will exceed supply farmers with-hold supply. The price will rise, often to a point where importing grain from the US is viable (import parity price). This means the price can be highly volatile, particularly in drought years which are becoming increasingly common.

Remember there are two opportunities to grow millet on the Darling Downs as well as potential for crops in Victoria, NSW and Central QLD, so predicting the size of the crop and therefore future prices can be extremely difficult. We combat this by buying grain and storing it or by taking long forward positions at prices which we think are reasonable to try and ride out the price fluctuations. 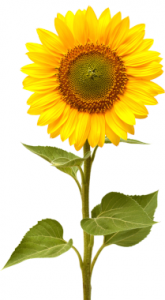 Wild sunflower is native to North America and was first cultivated around 3000 BC. It may have pre-dated corn as an Indian crop and was widely used for food and medicinal purposes. The Spanish took the seed to Europe around 1500 to show off as an ornamental plant. By the 18th century sunflowers were produced on a commercial scale for crushing, particularly in Russia where Peter the Great is credited with promoting the crop. Russia was the world leader in production and breeding for many years. It is believed Russian migrants returned the crop to its homeland in the US in the 19thC and it was there during the 1970’s that seed companies began to produce hybrid seeds which produce higher yields, oil content and resistance to disease.

Australia produces less than 1% of world production of sunflower seed. It is a summer crop whose production fluctuates in response to relative market prices of alternative crops such as sorghum.

“Monos” Monounsaturated oil, with over 80% oleic oil. This is good for frying food and has a healthy nutritional image.

The oilseed sunflower has three products, oil for human consumption, protein meal for the livestock industry and the use of hulls for fibre in both cattle feedlots and mushroom compost.

Birdseed varieties usually have a much lower oil content, about 30 to 35%, owing to a higher proportion of hull to kernel. The seed is black and white striped and should be plump and well filled. The Pacific variety Sunbird 7 is the preferred variety for Avigrain. Because birdseed sunflower demand is much lower than for oilseed, plantings are again often irregular and speculative and the price can fluctuate dramatically. As with canary, Avigrain contracts a portion of our annual use.